When Brian May was a teenager, he and his father built their own electric guitar, the Red Special. It’s the one he’s played on every Queen album and it even has its own bodyguard on tour. 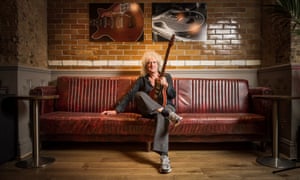 Brian May: 'It took two years and was all done with hand tools, using any materials we could lay our hands on. The neck was part of an old fireplace'It’s 1963, and against the backdrop of the emerging rock’n’roll scene, a guitar-mad teenager is pottering about at home with his dad having a go at making an electric guitar. Fast forward 50 years and that nerdy teenager has metamorphosed into Brian May, the “guitar god” at the heart of one of the world’s greatest rock bands, Queen. And that homemade guitar – the Red Special – which began its life as a father and son hobby, has achieved iconic status.It’s the Red, or “the old lady” as Brian calls her affectionately, that you hear on every Queen album and the one he plays at every concert. It was the guitar on which he played the national anthem from the roof of Buckingham Palace in 2002 for the Queen’s Golden Jubilee. On tour, it has its own bodyguard, it has a dedicated Wikipedia page and has become a brand – Brian May Guitars – producing affordable replicas.

Now, to mark the Red’s 50th anniversary and to the delight of guitar geeks everywhere, May has deconstructed it in a new book that details every screw, spring and tool that he and his dad used.

But on a deeper level, and importantly for Brian, in recounting how they made it, he reveals for the first time the nature of the close but complex relationship he had with his father.

It is more than 20 years since his father’s death but when we talk, May is still visibly moved, recalling their precious time in that workshop. “I was an only child and pretty sheltered growing up in our small house in Feltham, Middlesex. Dad was an electronics engineer and during the war he served in the RAF at where he met my mum, Ruth, who was in the WRAF.

“After the war they married. I came along and he got a job developing the landing system for Concorde. Dad could make anything. He converted our spare bedroom into a workshop where he made all our household appliances including our TV.”

May says he was an overachiever at school, flying through his exams with top grades. His passion for music was ignited by his father who played the piano and banjolele by ear.

“But I desperately wanted a guitar, so when I was seven, Mum and Dad scrimped to buy an acoustic – which I still have – and he taught me the shapes on his banjolele. It wasn’t long before I had electrified it, plugging it into a homemade amplifier. At 16, I was desperate for a proper electric guitar, but there was no way we could afford it, so Dad and I started making one.”

Brian’s dream was an instrument that could “talk” to him and “feed back in a good way”, like he’d seen his hero Jimi Hendrix do. And Harold made that happen, helping him to create the unique tones and sounds that have defined his playing style. 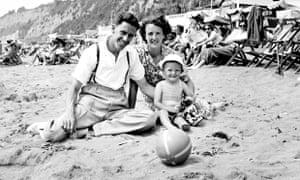 Brian May on holiday with his parents. Photograph: Carlton Books“It took two years and was all done with hand tools,” he says, “using any materials we could lay our hands on. The neck was part of an old fireplace. We hand-carved the inlay on the fret out of old mother-of-pearl buttons and the tremolo arm was made from a bicycle saddlebag holder, topped off with the tip of one of my mum’s knitting needles!“It was a special time and we never really argued. Although Dad did turn the air blue after the chisel slipped and he a gouged a big piece out of the wood. He never forgave himself, he was such a perfectionist. We had no idea how big a part the Red [named after the colour of wood it was made of] would play in my life – I thought I’d just have fun with it at home.”Ironically, neither could they have foreseen that the project that fuelled May’s passion for playing electric guitar would also tear them apart. It was while studying for a PhD in astrophysics in London that he met Freddie Mercury and Queen was born.“Dad was mortified when I chose the band over finishing my PhD. He thought I was throwing away my education. But, in the end, the pull of the music was too hard to resist – especially when we got asked to tour with Mott the Hoople.“When Queen was taking off, we didn’t speak for nearly two years. He also hated the fact that I was living with a woman, who turned out to be my first wife, Chrissie. He thought it was immoral. I couldn’t understand it. There seemed such a conflict within Dad. On one level he was so in tune with my music – after all he helped me make the Red – but on another level he couldn’t accept my rock star life.”Advertisement

The rift had a devastating effect on his mother’s health as she desperately tried to make the peace. “It drove her to a nervous breakdown. I inherited my dad’s stubbornness and she couldn’t get either of us to budge. I still regret that I wasn’t more conciliatory, but Dad and I were just too much alike.” 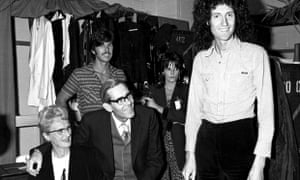 Brian May with his mother and father, Madison Square Garden, New York 1977. Photograph: Carlton BooksThe turning point came when Queen played Madison Square Garden in New York in 1977.“I put my parents on Concorde – which Dad had worked on but could never afford to fly on – and told him to see what he thought. They came out with Chrissie and our baby son, Jimmy. I put them up in a hotel, told them to order room service and after the show, Dad shook my hand and said ‘OK, son, I get it now.’ That was a pivotal moment for me – I’d so desperately wanted his approval.”Poignantly, it was only much later that May found out there was an underlying reason for his father’s initial dislike of his lifestyle.“Dad confided in me that when he came out of the RAF, he’d like to have taken off and joined a band. But he had me on the way and needed job security. I realised then that he’d found it hard to accept my choice because it was a dream he’d been forced to reject.”His father also managed to keep from him the financial battles he’d faced throughout his life.“As a kid I didn’t realise that we were really poor. When I discovered Dad was still trying to pay off his mortgage quite late in life, I just did it for him. But he wasn’t comfortable with that and told me that he thought he’d failed because I earned as much in a night as he had in his career. Not true – he was wonderful.“Dad died from cancer in 1991 [the same year as Freddie], he was only 66, really fit and didn’t drink. But he smoked 40 a day and that’s what killed him.”While Brian was still in a state of shock after his father’s death, his mother dropped another bombshell. “Mum told me they’d had a difficult relationship. But as a kid I had no idea, it just felt like a secure and loving home. She felt she’d just submerged herself in Dad, as wives did in those days. She made up for it much later, getting a job in a chemist’s and turning into this great, social person.“I had a wonderful 10 years with Mum until she died suddenly at 76 of an aneurysm. I wish they were both still here, especially to celebrate the Red’s 50th birthday. Dad’s motto was “If a thing’s worth doing, it’s worth overdoing.” We certainly did that with Queen!“I hope he’d be proud. Since he died, I’ve become a person who tries to make a difference to the world, and not just through music. I think he’d smile, nod his head and say ‘Yes, son, you’ve done the right thing.’”